This is a postmortem about the creation of Alice Aforethought, and thus may contain spoilers.

Originally I had a different and much more elaborate game planned for the Comp, but after creating a prototype of that, I wasn't happy at all with the results. So that one is back on the stove to simmer some more. I wrote an adult game (Sex on the Beach) and had planned to finish it in June, then take July and August to make something for IFComp. SotB took about three more weeks than I planned. It was supposed to be a short game, but the writing and scope of that ballooned to be a lot more complicated (in a good way) than I had planned. The other advantage is I used that game to experiment with every possible interaction type I could think of and shake out all the potential pitfalls and mistakes while getting comfortable with working in AXMA Story Maker, so I consider it time well spent. SotB placed first in the AIF MiniComp.  I'm not sure I could have produced Alice so fast and had so many ideas for it had I not spent that extra time on the previous game.

I'm a huge fan of Alice in Wonderland. I wrote a children's stage musical based on it a bunch of years ago. So Aforethought is basically my "greatest hits" amalgamation of my favorite scenes and a chance to play with the nonsense physics. Doug Egan in his review called it "Lewis Carroll fan fiction" which is pretty much correct

I had the idea to do this game several years ago,and made a couple of test runs and false starts in Inform 7 (I will try to attach them to this post if anyone has interest). The major idea was that there would be no diagonal (southwest, northeast etc) directions on the map, but when the Alice becomes a queen, those directions would become available, and each room would have several versions of itself which allowed you to move further into the past or the future by moving in those diagonal directions. My other concept was that going through the looking glass returned the player to the same map, but all the directions would be flipped; they would need to remember to go east if they actually wanted to go west. It probably would have been very annoying. The other idea I had that mostly made it to the final game was that there was a looking-glass "false" Alice doppelganger who tormented the player and managed to do everything familiar in the stories first, thus messing up the situation and the puzzles would center around finding ways to accomplish book scenes even if Alice had already stolen the "Drink Me" potion before you got there.

The original title was Alice Squared, and I even made a dumb logo of it: 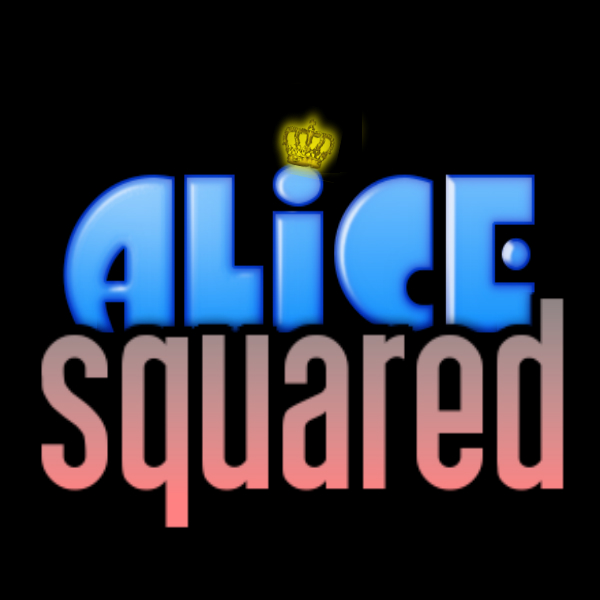 Madness. Mushrooms. Other things that begin with M.